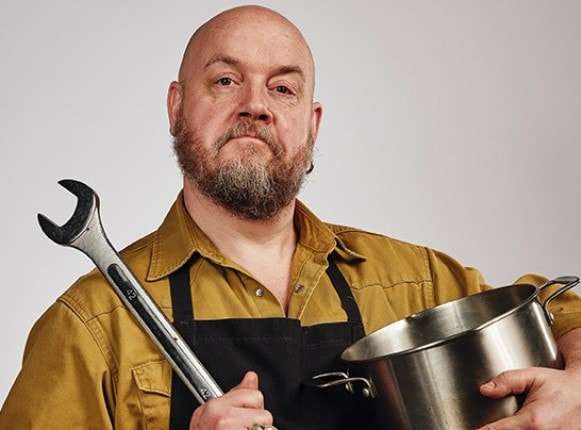 He’s been described as a culinary Bill Bailey, only with chopping boards instead of keyboards, and the anarchic face of food – and he’s here on 6 November.

Movable Feast is the latest comedy and cooking show from award-winning stand-up George Egg. Watch him make gourmet food live in unusual ways, with the chance to taste it at the end.

In his first show, Anarchist Cook, he made a meal in a hotel room with the complementary appliances. In his second, DIY Chef, he was stuck in a shed cooking with tools. Now it’s time for planes, trains and automob-meals (sorry).

Enjoy handy hacks on getting items from the train buffet trolley, beating rip-off restaurant prices at the airport and you can turn unexpected road-works into a picnic. Here’s what he had to say.

Q: For those who don’t know you, how did you become the anarchist cook / DIY chef?

By accident, kind of. I’ve been a stand up for more than 20 years and touring around the country some years ago I started seeing what I could cook in my hotel room using the appliances they had.

I realised I was pretty resourceful as well as being a not-bad cook, so I turned those experiences into my first solo show Anarchist Cook.

It was a huge success and realising I’d found a niche which I was both happy to occupy and which nobody else seemed to be doing, I carried on and looked for other environments to cook in. The second show was with power tools and this one is with engines and other forms of transport.

Q: What’s the strangest and hardest thing(s) you’ve cooked with?

Gosh I don’t know. I think my favourite is still the wallpaper stripper from show two. With it’s billowing steam it really does look the business under the stage lights.

That’d have to be in the aisle of a Boeing 737 – but you’ll have to come and see the show to find out more.

Q: What do you have planned for your next tour?

I’m considering a “best of” next. Having done three shows, and having had lots of newer audience members saying they were disappointed they missed out on the first two, I’m thinking a tour where I do a recipe from each. Then perhaps a fourth new recipe too.

Q: Do you find cooking in a conventional kitchen boring?

No. I find it extremely easy and relaxing. And stress-free. It’s a real treat actually. Haha.

Q: When you’re at your local DIY store or doing the shopping, do you look at stuff on the shelves thinking “I could whip up a nice whatever with that?”

You’ve hit the nail on the head. Yes. And not just that but walking around any food shop I’m thinking constantly “what could I do with that that’s different?”

Q: On a serious note, what’s your food / cooking ethos – in terms of health, the environment, the importance of people coming together over a meal…

I think food is a great leveller. It doesn’t matter if you’re a member of the royal family or a refuse collector, you still eat and you still appreciate good food. And it’s also utterly essential.

We all eat. The show, while being about food and cooking is just as much about thinking outside the box, being experimental, being creative and innovative and resourceful and that translates to all things.

Being resourceful creates good message with regards to the environment – reusing, rethinking etc. The whole experience is very communal as the audience eat the food together at the end, if they want to, at their own risk!

Check out our full live performance programme below.

Don’t forget, our autumn term of classes here at The Garage Norwich and at The Workshop King’s Lynn are in full swing. Click each venue to visit their websites.

Interested in a career in the creative arts? Our HNC Programme in Performing Arts just welcomed its latest cohorts. Find out how you can follow in their footsteps by checking out our accredited qualifications page.

Poor Ella. She just wants to be a famous rock star, but her sour-faced sisters sabotage her dreams like little Simon Cowells. Can you help 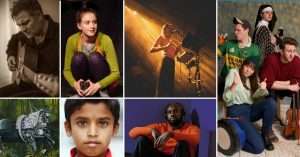 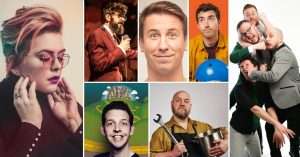